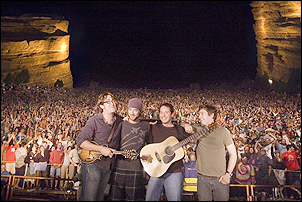 The convention anticipates 75,000 people in attendance, and a huge international and national media audience, for the acceptance event. This 2008 Democratic National Convention is a monumental moment in the country's history and in Denver specifically, marking the first convention to be held in Denver in one hundred years. This acceptance speech event, which was moved to Invesco Field at Obama's request, will host more general public than any previous acceptance speech.

Yonder Mountain String Band is proud to call Colorado home, and to be a part of a community that has so graciously supported the band since its beginnings nearly ten years ago. Over the past decade, Yonder has built a loyal and strong fan base in Colorado, and throughout the country: one that has enabled them to perform and headline at the legendary Red Rocks Amphitheater, to host three-night stands at the historic Fillmore Auditorium in Denver for New Year's Eve, and to perform at the famed Telluride Bluegrass Festival seven years in a row.

After ten years of solid touring and recording, Yonder Mountain String Band continues to break new ground, bending their rock-infused bluegrass sound with their marathon live shows. Jeff Austin (mandolin), Adam Aijala (guitar), Dave Johnston (banjo), and Ben Kaufmann (bass), have formed a group that is a force to be reckoned with. This summer has been very busy for the band, including the release of Mountain Tracks: Volume 5 (the band's new live album), a national tour, a main stage performance at Bonnaroo, the band's seventh appearance at the Telluride Bluegrass Festival, a performance at the inaugural ROTHBURY festival, the annual North West String Summit, hosted by the band, and their big return to headline Red Rocks. The band will close out their summer touring with a performance at Jazz Aspen on Labor Day. Yonder heads back out on tour for the month of October. In between touring, Yonder will return to the studio with producer Tom Rothrock (who's produced Elliot Smith and Beck), to record a new studio album. –by CelebrityAccess Staff Writers