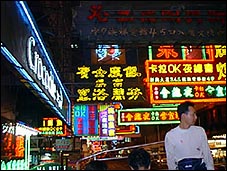 BEIJING (CelebrityAccess MediaWire) — In their continuing efforts to shape political opinion in and among it's rapidly westernizing urban population, China's censors are now turning their attention to Karaoke parlors, the Sidney Herald is reporting.

China's Ministry of Culture has responded to the perceived problem by issuing new rules governing music that can be used for Karaoke, in an effort to prevent "unhealthy" music from being played and ostensibly to protect intellectual property rights.

Liang Gang from the Ministry of Culture told state-run media that "All the songs in the database for use by karaoke parlors and consumers need to be censored" to ensure content meets government standards". Government inspectors would be looking at lyrics with political or sexual content and even slang from Hong Kong.

Karaoke is big business in China, drawing tens of millions of participants each year. They pay about 6 dollars to rent a private karaoke room, rates that even mid-level workers can afford.

"I think it's a policy to control content, but also to control who gets the money. If a new song wants to enter the system, you have to pay and the Government gets the proceeds." Tao Wei, a Chinese government youth filmmaker and playwright told the Herald. – –by CelebrityAccess Staff Writers