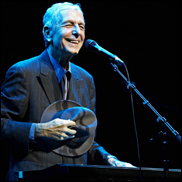 Promoter Michael Gudinski said everyone on the tour has been devastated by the
tragedy and hope the contribution will go some way to aiding those in need.

Michael Gudinski, Managing Director of The Frontier Touring Company said;
“Leonard has loved his time in Australia on this tour and is shocked and deeply
saddened by the news of the fires. Leonard, Paul, their touring parties and
everyone at AEGLive UK and The Frontier Touring Company wish to extend their
heartfelt sympathies to those that have suffered the loss of loved ones or their
homes through this terrible tragedy.”

A charity bucket collection will also be conducted at the Leonard Cohen with Paul
Kelly concert at Rod Laver Arena.