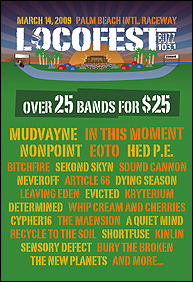 JUPITER, FL (CelebrityAccess MediaWire) — Locofest is set to roll on March 14th at the Palm Beach International Raceway. The festival will be headlined by Mudvayne and feature 25 bands along with International Motorcycle racing throughout the day. Fans will be permitted to camp on premsis on Friday and Saturday night. With an eye towards the dire economic times, the festival is being promoted as a 'low-dough' event and tickets will set you back $25 shekels.

The festival has been a popular event in Florida for the last 17 years and has provided a stage for numerous up and coming artists. Past lineups have included ncluded Kid Rock, System Of a down, Alice In Chains Godsmack, Limp Bizkit, Disturbed, Buckcherry, Slipknot, Staind, Alice Cooper,Sevendust, Dio with Black Sabbath (Heaven and Hell) , Queensryche, Shadowsfall, Shinedown, Damage Plan with Dimebag Darrell, Zakk Wylde’s Black Label Society, Faith No More, The Dropkick Murphy's and more. The festival also gives a chance to unsigned bands to perform on a festival stage and participating acts will also be cross-promoted on South Florida's Buzz 103.1 alt-rock station.

For more information on this event, check them out online here. – CelebrityAccess Staff Writers