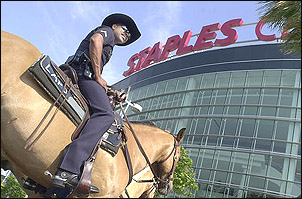 Concerts West, a concert promotion arm of AEG, and Nederlander Concerts have both been given the exclusive booking and concert promotion rights at the Staples Center in Los Angeles. In addition, both companies will assist L.A. Arena Company (also an AEG company) in booking national touring concerts at the Forum.

The new relationship is a result of a settlement of an ongoing dispute between Staples and Nederlander Concerts–which had been in arbitration since July 2002.

AEG filed a lawsuit last year to end Nederlander's exclusive promoter rights at the
Staples Center because of its failure to meet a $2.4 million annual guarantee.
Nederlander then filed a complaint with the American Arbitration
Association, alleging that AEG interfered with its exclusive promoting agreement
by staging shows there via Concerts West, a concert promotion company it had
acquired.