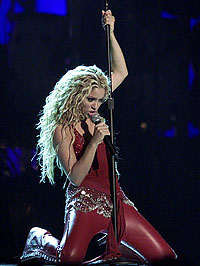 Shakira sold out all five concerts, February 9 – 15 in Mexico, selling 147,911 tickets and grossing USD $6,348,394.87. "With Shakira, we delivered to our audiences the globes hottest performer at the exact moment when she’s celebrating international superstar fame," says Bruce Moran, CEO OCESA Presents. “We're currentlyin discussions to work with Shakira in other situations."

BOGOTA, Colombia(AP) — Latin pop star Shakira bewitched thousands of Colombian teenagers _ including the sons of the nation's president _ in her first concert in her homeland in three years.

The Colombian diva emerged from an enormous, papier-mache cobra head Wednesday night to the roars of her fans, who were clearly proud of the Colombian legend who has a Latin Grammy and numerous MTV music awards under her low-slung belt.

Barefoot and clad in belly-baring black leather, Shakira sang in both English and Spanish for two hours while playing the guitar, harmonica and drums and performing her signature hip shake.

More than 40,000 people attended the concert in a downtown soccer stadium in Bogota, officials said. About 2,000 police officers were posted both inside and around the grounds of the stadium, checking for alcohol, weapons and tape or video recorders.

"I am really happy, because I've fulfilled the dream of my life," said Liana Maria Ramirez, an 11-year-old who came to Bogota with her mother and friends from the town of Fusagasuga, 60 kilometers (40 miles) south of the capital.

At the end of each song, Shakira's fans shouted, "You shined, Shakira, you shined."

She responded, "You don't know how excited I am to be in the country of my birth, and to sing to Colombians. Returning home is like being reborn."

The 26-year-old, who lives in Miami, met with President Alvaro Uribe on Tuesday. A day later, Uribe's two sons attended the concert, surrounded by presidential security.

Colombia's Foreign Minister Carolina Barco said that Shakira has become one of the nation's best ambassadors.

"Shakira inspires only love," Barco told The Associated Press while at the concert.

The star expressed the same affection for her Colombian fans. "I have had many good nights, but I will never forget this night in Bogota," she said.