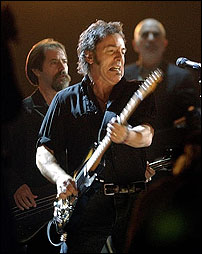 Bruce Springsteen and the E Street Band have added a 10th concert at Giants Stadium in East Rutherford, NJ building on their record-setting run. August 31 has been added to July 15, 17-18, 21, 24, and 26-27 and August 28 and 30. If all 10 concerts sellout, the gross will be about $38 million with an attendance close to 555,000 fans for the in-house New Jersey Sports/Exhibition Authority promotion.

Due to overwhelming ticket demand, the Eagles have
added concerts to their "Farewell I" tour in Atlanta, Houston, and Philadelphia. A third concert has been added in Boston. The band, consisting of
Glenn Frey, Don Henley, Joe Walsh and Timothy B. Schmit, will be performing
songs from their 30 year career. Concerts West, an AEG Live Company, is the
national promoter of the Eagles "Farewell I" tour.

"Caesars Palace is committed to presenting only the elite of the elite in the entertainment world and Seinfeld certainly fits that category," spokesman Michael Coldwell said Monday.

Celine Dion's new show, "A New Day," opens March 25 at the Colosseum for a three-year run. She'll be on vacation when Seinfeld is in town.

(AP)Atlanta GA – After being rejected twice by the city of Atlanta, promoters of a hip-hop festival planned for April hope to hold it at the Georgia International Horse Park in Conyers.

Town officials have agreed to host the Urban Hip-Hop Music Festival at the park during the April 11 weekend.

However, a co-sponsor of the proposed festival, the national Hip-Hop Summit Action Network, says it will not participate. The group, founded by former NAACP head Benjamin Chavis and hip-hop impresario Russell Simmons, is responsible for attracting musical headliners such as Nelly and Eminem to the festival.

"It appears that some members that were connected with the original plans have negotiated with an alternative site in Conyers," Chavis said late Wednesday. "We wish them well and pray for their success."

Chavis is exploring staging a "hip-hop peace concert" in an unspecified indoor venue in the metro area April 12-13.

The 1,400-acre horse park, with concert seating for 17,000, was built for equestrian events during the 1996 Olympics. It has been the scene of performances by Kenny Rogers and Patty Loveless.

Conyers Mayor Randy Mills said he expects about $100,000 in sales taxes from the event for Rockdale County's school system and local government.

"This is a pretty big hit," Mills said. "We think this is going to have a great economic impact on the community."

N'Dour, who had planned to embark on a 38-city tour on March 26, issued a statement Friday saying a tour of the United States would be "inappropriate."

"It is my strong conviction that the responsibility for disarming Iraq should rest with the United Nations. As a matter of conscience I question the United States government's apparent intention to commence war with Iraq," said the 43-year-old singer, who is also Muslim.

"I believe that coming to America at this time would be perceived in many parts of the world — rightly or wrongly — as a support of this policy, and that, as a consequence, it is inappropriate to perform in the U.S. at this juncture."

The Grammy-nominated N'Dour is a superstar in Senegal, a predominantly Muslim country. He is also a world music star in the United States and Europe.

In November 2002 while Pseudopod was on the road in support of their self-titled debut CD, their lead singer, Kevin Carlberg, sought treatment at a local medical clinic for terrible headaches and nausea. A CAT scan revealed that it was a small tumor that would most likely require surgery. Carlberg and the rest of the band immediately returned to Los Angeles. After the tumor was diagnosed as malignant, a five-hour operation to remove the tumor soon followed. As a result, their upcoming tour dates with O.A.R. were canceled.

Radiation and chemotherapy treatment followed the procedure, and Carlberg spent late last year and early January recuperating from his illness. By mid-January, his doctors gave him the okay to go on tour, and Pseudopod is now back on the road with O.A.R.

LOS ANGELES (AP) — Vince Gill's mini-tour and summer tour are sharp contrasts, both designed to promote his new album. After a shorter string of small intimate club venues, Gill will move on to big arenas of 12,000 fans at a time.

Gill said playing smoky little clubs and big outdoor arenas where the lights draw bugs are each challenging, and satisfying.

"The beauty is I've done them all," Gill told AP Radio. "I've done them both, and many more worse and better than all of those. The thing is to find the positive points in each one and kind of make your mind set about that."

"When the drummer's just like two feet behind me, and my guitar player's right at my right elbow, and everybody's just kind of all packed together, that's musical, and that's people playing music together on top of each other. It doesn't get any better than that," he said.

"The real beauty of playing a small place is, yeah, granted, it's smoky, it might be a little loud, all those kind of things," he said. "But people there — there is an intensity. There is a thing that happens that makes you feel a little bit more musical than in a big arena full of 12,000 people. The trade-off is, it's in your face, it's at your feet."

But that doesn't mean Gill doesn't enjoy playing big venues. He said you just have to have the right perspective

"Then there is the trade-off of playing in a big arena, and the lights go out and you play a big hit and the place goes nuts and you hear 12,000 people go crazy," he said. "It's a major Adrenalin rush. It's just a little different.

"It's what Roy Orbison told me a long ago. What's it like playing these places? 'Son, it's just a really big beer joint.'"

Krauss had been ill with coldlike symptoms and is having a difficult time singing, her manager, Denise Stiff, said Thursday.

Doctors will re-evaluate her condition next week.

Krauss and Union Station are scheduled to perform March 19 for the National Association of Record Merchandisers in Orlando, Fla. The concert has not been canceled.

Krauss' March 13 taping with Tyler will be rescheduled as soon as possible, Stiff said.

"Crossroads," which airs monthly on the Country Music Television station, pairs country artists with those from other musical genres. Past shows have featured the Dixie Chicks with James Taylor, Hank Williams Jr. with Kid Rock and Travis Tritt with Ray Charles.

NASHVILLE, Tenn. (AP) — A few country singers are battling vocal problems just when they are on the brink of big shows and album releases.

Alison Krauss is the latest addition to the list. Doctors at the Vanderbilt Voice Center in Nashville have recommended vocal rest for Krauss for an undetermined amount of time. Her manager says Krauss had been ill with cold-like symptoms and is having a difficult time singing.

The taping of a "CMT Crossroads" show with Krauss, her band Union Station, and Steven Tyler has been postponed. The taping was originally scheduled to take place next week, but will be rescheduled.

Doctors will re-evaluate her condition next week.

Pam Tillis' doctor says that the songstress is making a great recovery. Tillis has been on vocal rest due to bruising on her vocals chords. Her label reports the latest exam by Dr. Robert Ossoff shows no new trauma, and has Tillis on the fast track for a 100 percent recovery. If she keeps healing like she's been healing, her doctor says Tillis will likely be ready to begin vocal exercises to rehabilitate and strengthen her vocal cords after her exam this week.