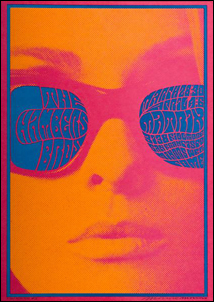 DENVER (CelebrityAccess MediaWire) — The Denver Art Museum (DAM) announced today that it has acquired a collection of approximately 875 artistically and historically significant psychedelic rock posters from the 1960s and ‘70s. These works demonstrate the innovative American typography, collage, illustration and use of color from this revolutionary cultural era.

Commissioned by concert promoters Chet Helms, Bill Graham and others, the posters
announce shows in San Francisco’s legendary Avalon Ballroom and Fillmore Auditorium concert venues, as well as events in other cities, including Detroit and Denver.

The Denver Art Museum is the first museum to acquire a full collection of first-print
sets of this size. Complete sets of these posters are rare and virtually impossible to
assemble today, as many works are extremely difficult to locate in good condition.
“An acquisition of this caliber– coupled with the recent addition of the AIGA Design
Archives – continues the Denver Art Museum’s commitment to creating one of the
most far-reaching and significant holdings of American 20th century graphic design,”
said Darrin Alfred, AIGA assistant curator of graphic design at the Denver Art Museum.

The sets were assembled by Boulder, Colorado, collector David Tippit, who
obtained these posters over the last 25 years. Tippit began collecting this material
after encountering the posters on a visit to San Francisco’s Haight-Ashbury district. “I saw the material and realized that it would be attractive to the larger public, but wasn’t quite on the radar of the art collecting world yet,” said Tippit. “I began collecting with the intent to make the collection available to a larger audience, which is why I was interested in working with the Denver Art Museum.”

Tippit compiled posters one at a time with special attention to locating posters in
excellent condition, and also reached out to several of the major artists to have the
posters signed.

The posters were created by numerous designers, including Wes Wilson, Victor
Moscoso, Alton Kelley, Stanley “Mouse” Miller, Rick Griffin, Gary Grimshaw and
Bonnie MacLean to promote concerts between 1965 and 1973. Influenced by
Viennese Secessionist lettering and dynamic light shows at concerts, the artists
were often given complete artistic freedom to create the posters – resulting in works
that embodied a more cultural than commercial feel. These works – originally designed to be tacked to light poles – captured the free love, drugs, and hard-edged rock music that symbolized both the concerts and the radical social change of the era.

“Wildly experimental, these posters reflect the psychedelic experience through a melting pot of hallucinatory imagery and unorthodox juxtapositions of electric colors,” Alfred said.
In addition to their unique artistic significance, the collections also have a solid historical significance. These posters were the visual embodiment of the radical social shift in American culture during the 1960s and ‘70s, and underscored the anti-war sentiment, sexual freedom, women’s rights and environmental activism that emerged as
defining issues of the time.

The Museum will complete the acquisition over a period of two years, and is
currently considering timing for an upcoming exhibition of the work within the next
two years. –by CelebrityAccess Staff Writers