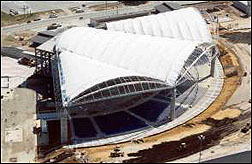 The rules at present stipulate that noise is in violation if the sound exceeds 65 decibels at any time. The new rules would allow for slightly louder sounds, up to 70 decibels and take an average of sound levels over the span of ten minutes to determine if the noise was in violation. The rules also strengthen restrictions on low frequency sounds after 11 PM.

According to the St. Petersburg Times, the panel, which included Noral Stewart — a noise consultant retained by Live Nation — met twice to consider the matter. Minutes from the meetings revealed that many of the comments and recommendations, including the controversial change to sound levels, originated with Live Nation attorney John Fenn Foster and that Stewart was the only expert to make a presentation at the meeting. Furthermore, while the meetings were open to the public, no advertisement was made.

"This rule is better science that has been peer reviewed by our panel of experts," Jerry Campbell, the director of the air management division of the county's Environmental Protection Commission told the Times "Some residents perceive this as an amphitheater rule, but that's not the case."

The shed has been a source of trouble for Live Nation since it opened in 2004. Numerous noise complaints led to the county filing a lawsuit against the promoter that resulted in a settlement that in part required Live Nation to build a $2.6-million sound barrier that needed a $60,000 refurb in the spring of '08.

Despite Live Nation's efforts, some Tampa residents are concerned that they are in for another noisy summer. "It looks like this revision has been written by a lobbyist for the amphitheater," one resident, Kim Grounds, told the Times.

Live Nation took exception to this with Wilson Rogers, EVP for the promoter's North American amphitheater operations said "Other than having the right to make a recommendation, we've had no part in drafting the rule." – CelebrityAccess Staff Writers

"Other than having the right to make a recommendation, we've had no part in drafting the rule," Wilson Rogers executive vice president for the company's North American amphitheater operations said. – CelebrityAccess Staff Writers