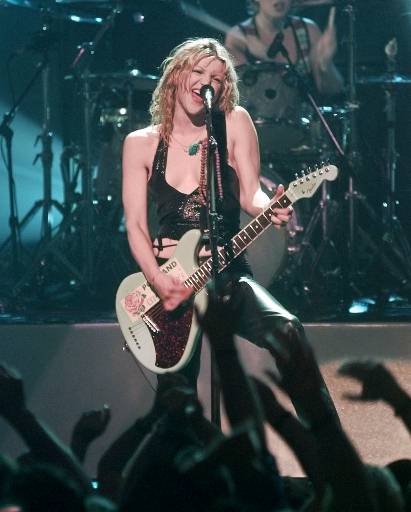 (CelebrityAccess News Service) – Courtney Love has signed an exclusive worldwide three record contract with Virgin Records. Love is now completing work on America's Sweetheart, which will be her first album to be released under her own name. Recorded at an ancient chateau in the South of France and completed in Los Angeles and New York, the album is due October 28 . Featuring several songs written in collaboration with Linda Perry (currently enjoying worldwide success with tracks she wrote for Pink and Christina Aguilera), America's Sweetheart combines driving guitars and undeniable melodies to create an album that is both her most creative and most commercial to date.

Love wrote, sang and played guitar in the legendary Los Angeles rock band Hole, which released three rock albums of the 90s: Pretty on the Inside, Live Through This and Celebrity Skin.

"There is no one more recognizable in rock than Courtney Love," says Matt Serletic, chairman and CEO, Virgin Records. "She has both the voice and the perspective to bring the world truly unique, truly important music. Virgin is thrilled to be working with her.

"I've had a fantastic time writing and recording this record, and I can't wait for everyone to hear it," says Love. "Music lets me communicate directly with my fans and I'm excited to work with Virgin Records in sharing it with the world." –edited by Bob Grossweiner and Jane Cohen