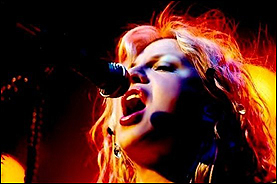 Courtney Love can proceed with her lawsuit against Vivendi Universal in a ruling reversal as a Los Angeles judge said on Oct. 2. Previously, Superior Court Judge Fumiko Wasserman ruled on the side Vivendi Universal throwing out 11 of the 15 charges. The new ruling allows a majority of Love's claims to go forward.

But after reviewing new evidence presented in an amended complaint last month by Love and her lawyer, A. Barry Cappello, the judge decided to reverse herself and overrule Vivendi on six of those counts. The judge is now granting Love the right to proceed with 10 claims against Vivendi, including her challenge to a provision in California's seven-year-statute that could open the door on free agency for recording artists.

"The music industry scoffed at Courtney Love when she first filed her cross complaint, blasting it as ludicrous and frivolous," Cappello told the L.A. Times. "It seems the judge disagrees with them. And by the time we're done, I believe the jury will disagree with them as well. This is a case that will affect the record business for many years to come."

The legal dispute began last year when Love notified Vivendi that she intended to leave the company. Vivendi immediately sued Love seeking damages for five undelivered albums under her contract, which the company described as a "fair, industry-standard agreement" that she "willingly" signed.

Love has also filed an additional suit against Vivendi Universal in an effort to gain control over the master recordings of Nirvana, the band founded by her deceased husband, Kurt Cobain. The suit, which also names former Nirvana members Dave Grohl and Krist Novoselic as defendants, accuses Vivendi of devaluing Cobain's music by distributing unauthorized samples of Nirvana guitar riffs, improperly using Nirvana videos for promotional purposes and failing to pay more than $3 million in Nirvana royalties.