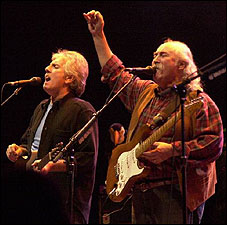 “The action was taken because of medical issues that have arisen for member David Crosby,” a statement on the group’s website read. An Australian newspaper reported earlier this month that Crosby had contracted pneumonia, which forced a tour postponement there.

“We deeply regret that the band will not be able to embark on this tour as scheduled. At this time, we thank you for your understanding and the band looks forward to seeing you this fall,” a statement from manager Donald Miller read.

The tour was set to begin March 19th in Oklahoma, and end April 15th in New York. –by CelebrityAccess Staff Writers