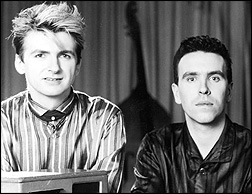 BOSTON (CelebrityAccess MediaWire) — Crowded House has confirmed its first US tour since 1996. Slated to start on August 4 in Northhampton, MA, the tour will take the band across country and back, ending on September 12 in Atlanta, GA. The tour is in support of the band's new record, its first since 1993. Entitled "Time on Earth," the band is Neil Finn – vocals/guitars; Nick Seymour – Bass; Mark Hart – keyboards/guitars; Matt Sherrod – drums. "Time on Earth," will be released on ATO Records on July 10, 2007. Opening most of these dates will be Pete Yorn. The first shows go on sale on May 19th.

"Time On Earth" is Crowded House's first new studio album in 14 years, and features original, founding members Neil Finn and Nick Seymour, along with former member Mark Hart and new drummer Matt Sherrod. "Time on Earth" is the band's first studio record since 1993's "Together Alone." The band's most recent release is a DVD of their farewell show from 1996 at the Sydney Opera House in front of 120,000 fans, entitled "Farewell to the World." Crowded House debuted the new line up and material in America for the first time since 1996 at the Coachella Festival.

"Time On Earth" was recorded at Roundhead Studios, Auckland, NZ, RAK Studios, London, and Real World Studios, Bath, and was produced by Ethan Johns (Kings Of Leon, Ryan Adams) and Steve Lillywhite (U2, Morrissey). Guitar legend Johnny Marr features on two tracks, lead-off single "Don't Stop Now" and "Even A Child," a song he co-wrote with Neil Finn. Another album track, "Silent House," was co-written by Finn and the Dixie Chicks, whose own version of the song appears on their Grammy Award-winning album "Taking the Long Way."

Crowded House formed in Melbourne, Australia, in 1985 and first tasted global success with their massive 1987 hit "Don't Dream It's Over." They continued to have hits for a decade, including "Something So Strong," "Weather With You" and "It's Only Natural." "Don't Dream It's Over" hit #2 on the American Top 40 and won the band Best New Artist at that year's MTV Music Awards, while "Something" reached the #7 spot. They produced four studio albums and a best-of compilation.

The dates for the tour are as follows: