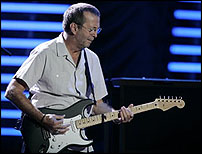 FAIRFIELD, CT (CelebrityAccess MediaWire) — A local Connecticut newspaper has uncovered a secret benefit concert contract for Eric Clapton in Greenwich – the only summer show set up for Slowhand aside from the Crossroads Guitar Festival in Chicago.

The paper decided not to publish the actual date of the show, but noted that the contract states that, “no public press or announcement pre or post event is permitted,” and that the “expected attendance” is “350 invitation only guests.”

The price of the event is also listed, appropriately reflecting Ray Dalio’s fortune, made as CIO of investment firm Bridgewater Associates, which is valued at $30 billion.

Dalio has previously secured Jeff Beck and B.B. King in 2003, Buddy Guy and Sheryl Crow in 2004, Carlos Santana and Robert Randolph in 2005, and the Allman Brothers and Bonnie Raitt in 2006.

Clapton’s contract states that he will be paid “$1,500,000” for the concert, plus a “$1 million dollar donation to a charity of Mr. Clapton’s choice to be paid the night of the show,” according to the Weekly. Clapton is the founder of a drug-rehabilitation facility, the Crossroads Centre, in Antigua.

Beyond the $1 million donation to a charity, the event’s main objective is to be a “private invitation only fund-raising event for China Care Foundation. No press.” The China Care Foundation, founded by Dalio’s son Matt Dalio, provides free medical treatment to Chinese orphans.

Clapton is reportedly set to play a 60-70 minute set, which the paper figured out to be “$416.67 per second of Clapton’s blues-lite noodlings.”

So far, the paper, as well as several other sources, has been unable to confirm a finalized contract or secure a quote from any of the parties involved. –by CelebrityAccess Staff Writers