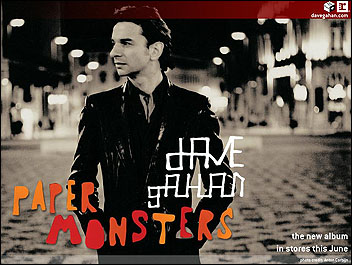 Depeche Mode vocalist Dave Gahan will embark on his first solo U.S. tour in support of his debut album Paper Monsters, due June 3 on Mute/Reprise Records. Gahan will launch the summer-long North American tour July 18 in Atlanta, GA after completing his 22-date European tour. Performing songs from Paper Monsters and various Depeche Mode songs, Gahan will be backed on the road by guitarist Knox Chandler, bassist Martyn Lenoble, keyboardist Vincent Jones and drummer Victor Indrizzo. Gahan wrote all of the album’s 10 tracks with multi-instrumentalist Chandler, whose credits include playing on Depeche Mode’s Exciter, as well as albums by R.E.M. and Siouxsie and the Banshees. Lenoble has played with Porno for Pyros and Janes Addiction; Jones has recorded with Sarah McLachlan and Cowboy Junkies; and Indrizzo has worked with Beck, Macy Gray, The Vines and Liz Phair.

Although Gahan has fronted Depeche Mode for 22 years, Paper Monsters marks his debut as a fully-fledged songwriter. Before now, career commitments, distractions and personal confidence barriers kept him from finding his true voice. “Hence the title of my album,” he says, “because I’d created these monsters which have got bigger and bigger over the years. But in the last few years I realized that it’s only myself that has created them.”