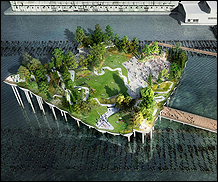 NEW YORK (CelebrityAccess) — IAC Chairman Barry Diller has reportedly revived a plan to build a performing arts center on a floating artificial island in the Hudson River in Manhattan.

Diller revealed that there was yet hope for the project, dubbed Pier55 at the Yahoo Finance All Markets Summit Wednesday afternoon, telling Yahoo's Editor-in-Chief Andy Serwer that “We have a prospect of it continuing. There is imminent life there.”

“I’m going to make one last attempt to revive the plans to build the Park, so that the intended beneficiaries of our endeavor can fall in love with Pier55 in the way all of us have,” Diller added in a press release issued concurrently with his appearance.

The project had previously been declared dead after Diller pulled his support for the Heatherwick Studio-designed Pier55 last month amid litigation and mounting costs.

“Because of the huge escalating costs and the fact it would have been a continuing controversy over the next three years I decided it was no longer viable for us to proceed,” said Mr. Diller last month in an interview with the New York Times.

Originally estimated to cost $35 million, the project, which would have seen a park and performance space built atop of a floating pier in the Hudson, had seen estimated costs balloon to more than $250 million due to the complexity of the design and unforeseen legal challenges.

Initially estimated in 2011 to cost $35 million, the project had reached a $250 million price tag due to the complexity of the design and unforeseen environmental and legal concerns.

According to New York's Curbed, New York Governor Andrew Cuomo paved the way for the revival of the project by interceding on Diller's behalf with litigants such as the City Club of New York who had sought to block the project. The City Club, backed by real estate investor Douglas Durst, had cited the lack of a proper environmental impact study but after the Governor's intercession, promised to forgo future suits.

“We have had productive conversations and it has been agreed that the legal dispute commenced by the City Club will cease, Pier 55 will go forward, and we will work cooperatively to complete the full vision for the Park,” Cuomo said in a statement.

“Today's historic commitment by Governor Cuomo to finish the Park and protect the Estuary is a great victory for park users and all New Yorkers,” Richard Emery, a founding member of the City Club, and counsel for the Club, said in a statement. “In that spirit, we will not litigate against Pier 55 and will work with the Governor to realize his visionary plan for completion of the Hudson River Park and for protection of the Hudson River."