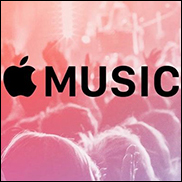 CUPERTINO, CA (CelebrityAccess) — While no numbers have been officially released, there may be some early indications that Apple's new streaming music service is underperforming when compared to rivals like Spotify.

In an article by Recode's Peter Kafka, DashGo, a distributor that specializes in providing music from indies to digital outlets is saying that Apple Music is representing about 4 percent of the volume of streams he’s seeing from Spotify.

Based on the fact that Spotify has at least 75 million users worldwide and Apple's estimated 10 million users, one would expect that the company's streaming volume would be closer to 13%.

However, part of the issue may be that DashGo specializes in artists that are generally less well known than top tier artists and may not be featured on Apple Music's publicity pages.

“I think Beats One [Apple’s free radio station] is very solid, and Taylor Swift is chalking up tens of millions of streams, but I don’t think the plays are trickling down as deeply,” Patterson told Recode.

Patterson also pointed to Spotify's user-created playlists that allows users with niche tastes to find new material may be a driving factor.