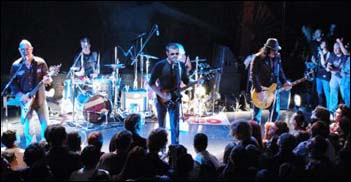 CLEVELAND (CelebrityAccess MediaWire) — According to Dotmusic Eagles Of Death Metal singer Jesse Hughes has told Axl Rose he can "go f–k himself" after his band was thrown off the current Guns N' Roses tour.

Hughes did not take kindly to the decision by Axl to sack EODM after only one date of their 15-show support stint in America.

Supposedly Rose made the decision after sections of the crowd booed Hughes and EODM at their Cleveland concert last Friday. Axl later renamed the group "The Pigeons Of Sh-t Metal" from the stage, before then ejecting them from the tour, a decision which has infuriated Hughes.

"Axl Rose is f–king out of his mind. He wasn't even there when we played. He got there about 30 minutes after we got done playing. He waltzed on to the stage and went nuts," he told the British music paper NME.

Explaining the poor reception EODM received from certain members of the audience, Hughes continued: "When we first walked out there the crowd were jeering, but it was because we weren't Axl Rose. These kids had been waiting there since 7 o'clock for the second coming of Christ, and Axl wasn't there yet. So a bunch of happy-go-lucky, sincere, and real-deal rock 'n' rollers came out and started playing.

"The jeers only went on for a little bit. By the end of the set we'd won those f–kers over," he insisted.

Hughes then went on to claim that Rose later offered to have EODM back on the tour, but he was too incensed to agree to the deal.

He said: "When my manager told me that, I just said, 'You can tell that motherf–ker to go and f–k himself, because I will never go through that again.'"

On a final note, the band has posted, on their web site, a quote from Dave Grohl "Disappointment from Axl is Like Being Knighted."