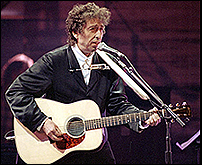 (CelebrityAccess MediaWire) — Bob Dylan's American Journey, 1956-1966, the first comprehensive exhibit dedicated to Dylan's formative early career, opens Nov. 20 at Experience Music Project (EMP) in Seattle. The exhibit, which runs at EMP through Sept. 5, 2005, kicks off a period of renewed examination of this critical 10-year period that charts Dylan's transformation from folk troubadour to rock innovator during a momentous, turbulent time in American history.

"Experience Music Project is honored to premiere the first major exhibition devoted to Bob Dylan's artistic 10-year journey," said Robert Santelli, director, EMP programs. "Few musicians in the history of popular music have shaped the face of American music and culture the way that Dylan has."

Bob Dylan's American Journey, 1956-1966 traces a body of musical work that drew from American folk and blues traditions, serving as a key link in the chain that extends from Southern work songs, Anglo American ballads and even early rock 'n' roll, to the many contemporary singer-songwriters for whom Dylan is a main influence.

The exhibit follows Dylan's personal and artistic development from his teenage years in Hibbing, MN, to early live performances in Greenwich Village to the historic "electric" performance in 1965 at the Newport Folk Festival. This 10-year span also encompasses the release of some of Dylan's seminal albums, including The Freewheelin' Bob Dylan, Bringing It All Back Home, Highway 61 Revisited and Blonde on Blonde.

In addition, the exhibit features four mini-films and a collage of rare, early television and concert film footage. It also includes interviews with Dylan reflecting on this intensely creative period in his early career for the first time on film. Also available are excerpts from the Dylan documentary Don't Look Back and the unreleased film Eat the Document.