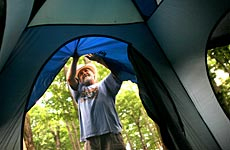 RHINELANDER, WI (CelebrityAccess MediaWire) — When Dave Versch came up with the idea for his music festival tent-lending business, he knew he’d found his calling.

Now known as Dancin’ Dave, 57-year-old Versch travels to a string of music festivals around the country, renting tents to other festival goers from $50 to $100 per night, including setup and takedown by Dave himself. The top packages come complete with kitchen sets, pots, dishes, utensils, and even a propane-stove-powered coffee pot.

The idea for the festival came to Dave after attending the bluegrass-based Merlefest in North Carolina in 1998, when a friend wished out loud that he could hire someone to haul his camping equipment.

“We were talking about what we could do to go to more festivals, not being lottery winners and all,” Dave told the Roanoke Times. “Before I was out of the parking lot, it hit me.”

Versch drove through to the night from North Carolina to his home in Wisconsin, brewing the idea for his company along the way. He walked into the house in the early morning as his wife, Lynn, was rising for work. The idea sounded like pipe dream to her at that point.

The business formed quickly, however, as Grey Fox Bluegrass Festival director Lisa Husted volunteered to back the idea. She began advertising Dancin’ Dave’s services before he’d even bought his first tent, and long before he set up his website, DancinDave.com.

Dave has become a sort of celebrity at many bluegrass festivals, since many of his customers are repeat patrons. Of course, the name also helps people to remember him.

“I’m becoming famous, even, in that world,” he told the paper. “People know me by that…it’s neat, they know me and they know I’m having fun.”

Dave admits that he is a pretty good dancer, generally preferring partner dances such as polkas, waltzes and two-steps, constantly befriending new dance partners at the festivals.

“I’ve taught a lot of people how to do it,” he said. “Growing up in Wisconsin, you’d better be able to polka, otherwise they won’t let you into weddings.”

For some of the larger festivals he attends, such as Merlefest, Versch will occasionally hire a small crew to help him take down the tents, but he prefers to keep things extremely simple: he only stocks 20 tents, and refuses to expand into selling tickets.

But, as far as he knows, there is no one else offering the same service, which makes expansion an enticing venture for Dancin’ Dave, who still keeps a full-time job on a public roads crew in Wisconsin. Festivals may eventually be his number one gig.

“I thought of quitting, I really did,” he told the paper. “It’s really tempting to quit the job and do more festivals, but that’d be a big gamble; so far my wife hasn’t let me do it.” –by CelebrityAccess Staff Writers