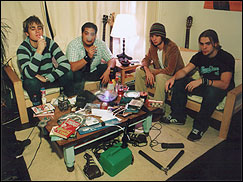 Fightstar has signed with Sanctuary Artist Management. The band is managed by Craig Jennings and joins his other clients including Funeral For A Friend (Atlantic Records) and yourcodenameis:milo (Fiction/Polydor). "I am delighted to have the opportunity to personally take on the task of developing the talent the band has, both as songwriters and as performers," said Jennings. "I look forward to helping them build what I know will be a long & successful career."

Fightstar, who formed just over a year ago and consists of ex-Busted member Charlie Simpson (vocals/guitar), Alex Westaway (vocals/guitar), Dan Haigh (bass) and Omar Abidi (drums), released their debut EP They Liked You Better When You Were Dead through their own Sandwich Leg Recordings in February. All 8 000 copies of the limited edition EP sold out in the first week; it was produced by Mark Williams (yourcodenameis:milo, Million Dead, Oceansize).

"We’re really happy to be part of the Sanctuary family and stand alongside everyone from Funeral For A Friend & yourcodenameis:milo to Iron Maiden & Guns N’ Roses," said Westaway. "Now we’re looking forward to making the music we love, recording a great debut album and touring everywhere this year."

"Fightstar has been something we’ve been doing in our spare time for quite a while now," said Simpson, "and it’s great to finally be able to devote 100% of our time to it with the backing of a manager like Craig and Sanctuary who understand what we want to achieve and how to achieve it." –Bob Grossweiner and Jane Cohen