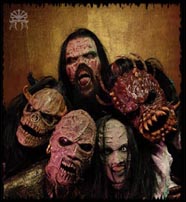 HELSINKI (CelebrityAccess MediaWire) — Finland's customs service is set to launch an awareness campaign against counterfeits tomorrow. The campaign will cover all kinds of counterfeit products – from music to medicine – and emphasizes the risks they pose to consumers. The campaign will feature a series of posters that will be shown at all customs points, harbors and airports across Finland.

Copyright Information and Anti-Piracy Centre (CIAPC) in Finland are contributing to the campaign with a poster designed by rock star Lordi. He condemns counterfeits in strong language: "A pirate copy is often cheaper than the original one. But the truth is that they are always pure crap. Buying pirated products is robbing the livelihood of your favorite artists."

The fight against counterfeiting is one of the goals of the International Customs Organization (WCO). This campaign has been designed in Finland to provide information that can be used all across Europe. All EU member countries have the right to use the posters, including the one designed by Lordi, in their own campaigns.

John Kennedy, Chairman and CEO of IFPI, welcomes the Finnish campaign: "True music fans should know that if they buy a counterfeit CD they are robbing the artist, composer and producer who made the music they profess to love. They are also very probably helping to fund organized crime. IFPI congratulates Finnish customs on this campaign that will make people stop and think about what they are doing when they buy a pirate product."

The MPA's Regional Director, Halli Kristinsson, adds: "Film makers take considerable effort to ensure that their movies offer the viewer the best possible experience in terms of picture and sound quality. Such efforts are wasted when the films seen are counterfeit copies as the quality is usually very poor. Furthermore, rather than supporting the film makers and other talent involved with the movie, the person selling the counterfeit is often part of an organized criminal network. We welcome the initiative of the Finnish Customs Office to increase the public's awareness so that they can elect to enjoy the magic of the genuine experience offered by movies; the legal ones, which provide the best possible quality."

According to CIAPC, the number of pirate copies imported to Finland has been reduced after the amendment of Finland's Copyright Law a year ago prohibited the import of any pirate products.

Antti Kotilainen, Director of CIAPC, says "The amendment of the law has had a clear effect on the import of pirate products and our physical piracy statistics have not been this positive in ten years."

Finland was one of the largest EU pirate markets in 2002 with nearly four million imported pirate discs. Now the situation is clearly better; according to CIAPC approximately 700,000 pirate discs were imported to Finland in 2006.

The prohibition of all import of pirate products has had a positive effect also on record sales in 2006.

Arto Alaspää, Managing Director of IFPI Finland, says "It seems that the sales volume of music recordings has grown by eight to nine per cent in the last year." This growth can particularly be seen at sales points in south eastern Finland, the region that has traditionally suffered most from pirate copy markets in Russia.