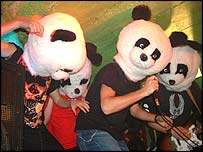 (CelebrityAccess MediaWire) — As the first band in Europe, Super Smart from Munich will release its complete album "Panda Babies" as polyphonic mobile phone ringtones with integrated voices and instruments only and not on traditional media like CD or vinyl. The introduction price for the album of 1.99 Euro introduces a new era of music history.

The four "Mobile Music Visionaries" from Super Smart have one thought in common: To release good music without dependency on the music industry. They emphasize the distribution of their digital music, a mixture of disco pop and electro punk, via mobile phones. The goal is to publish real sounds, texts and tunes without interference from majors, classical sales channels and salesmen. From the artists directly to their fans – first-hand! This explains, why the identity of the band members must remain "top secret" for the moment. Some of them have already been in the music business for some years and don't want to be slowed down by existing structures on their way to the new era. Consequentially the music video for the first extraction "I like your records" was made for mobile phones only.

The use of new polyphonic ringtones with voices in advanced format, which enable voices and recorded instruments to be integrated in ringtones, is the basis of this project. Gofresh Mobile Music, the leading Mobile Music Label in Europe, sees a rapid development according to head of development Jukka Saarelainen, "Before long ringtones will be as long as a classical CD single, stereo format and yet only 20 to 50 kB in size". This is a gigantic advantage in comparison to MP3-format as the user pays for every kB!

"Music has to be re-thought," says Antonio Vince Staybi, GMM founder. "20 Euro for an inflexible album, lowest margins for artists as well as the loss of image of CDs, which are nowadays distributed everywhere free of cost as giveaways, necessitate an immediate change in thinking."

Toni Werner Montana, Label Boss GMM Europe, add, "We release songs within a few hours Europewide without interfaces to the classical music industry. Our prices for a ringtone album or a compilation of ten to twelve tracks, including a mobile phone video, will settle down at four to five Euro and the price for a single ringtone at 1.49 Euro in the medium-term."

The complete eight track album plus bonus material is available for free during the first two weeks after release for every WAP and UMTS mobile phone at: umts.gofresh.tv/supersmart Afterwards it will be available at well-assorted ringtone distributors. –Jane Cohen and Bob Gossweiner