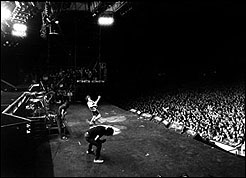 (CelebrityAccess MediaWire) — Rock music remained the most purchased genre among music consumers in 2003 while fans continued to purchase their music from new sources, according to the Recording Industry Association of America's (RIAA) 2003 Consumer Profile, an annual demographic survey of more than 2,900 music consumers in the United States.

"This is an exciting time to be a music fan," said Mitch Bainwol, chairman and CEO of the RIAA. "Never before in the music community's history has there been so many ways to enjoy music legitimately. Record companies are working with many different third party technology and distribution businesses to help consumers enjoy music in a wide variety of ways, including authorized download and subscription services. Music companies are also working with digital, satellite and Internet radio outlets as well as with cellular phone companies. We hope fans of all ages continue to embrace the numerous great ways they can experience music legally."

Research Associates, is designed to contribute important demographic information about purchasers of sound recordings in the United States, as well as provide a profile of consumer purchasing patterns over the past decade. Rock music remained the most purchased genre among music consumers in 2003. It represented 25.2 percent of the market, up slightly from 24.7 the previous year
In 2003, non-music-only outlet purchases continued to grow

from 50.7 percent in 2002 to 52.8 percent in 2003. These types of stores include, but are not limited to, mass merchandisers, discount department stores, electronics stores and book stores.

Suggesting that consumers are increasingly aware of the legal ways to acquire music from online sources and digital music providers, online music purchases increased in 2003, up to five percent from 3.4 percent in 2002, while digital downloads increased to 1.3 percent of the market in 2003, up from 0.5 percent in 2002. Purchases at conventional record stores continued to decline in 2003, from 36.8 percent in 2002 to 33.2 percent in 2003.

"The decline in young buyers, who are the most active

downloaders on peer to peer systems, is another confirmation that illegal downloading is one factor, along with economic conditions and competing forms of entertainment, that is displacing legitimate sales," added Bainwol. "In fact, a recent study by Voter Consumer Research affirmed that consumers who download more are buying less. In that study, 33 percent of people between the ages of 18-24 who download said they bought less music than in the past year." –Bob Grossweiner and Jane Cohen