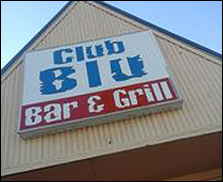 FORT MYERS (CelebrityAccess)– Two people are dead and at least 14 are injured after gunfire broke out in the parking lot of a Fort Myers club early Monday morning.

Authorities said that they have one suspect apprehended, but believe to have another still at large. Police are canvassing the area. Three additional people have been detained for questioning.

Police responded to Club Blu Bar and Grill, on Evans Avenue, around 12:30 a.m. and found several victims suffering from gunshot wounds. According to a spokeswoman from Lee Memorial Health Systems who spoke to The News-Press in Ft Myers, most of the 18 patients transported to hospitals have been let out.

Two people are still in ICU, according to reports, one in serious condition and the other in critical.

Authorities are saying that victims involved are between the ages of 12 and 27. The club was hosting a teen night when the shooting took place.

Police said there are two other scenes connected to the shooting. One at 2550 Parkway Street where the home and vehicles were shot at. There was one minor injury.

The other scene is on Ortiz Avenue between Luckett Road and Ballard Road where a person of interest had been detained, police said.

A family member has confirmed on Facebook that their 14-year-old cousin is one of the deceased victim. -Staff Writers