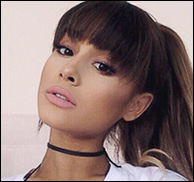 (CelebrityAccess)–According to messages, which were released via Wikileaks on Friday, July 22, Ariana Grande, 23, was being considered as a performer for a gala for the President of the United States, but in an extremely detailed back-and-forth that took place last September, she was ultimately deemed unfit for the job.

Grande was barred from performing at a White House function last fall after she made headlines for licking a doughnuts while saying she hates America – (meaning for the high calorie, greasy but so good – foods available) according to an exchange from the recently hacked Democratic National Committee emails.

The extensive file also notes that Grande (real name: Ariana Grande-Butera) was not hit with criminal charges following the July 4 incident, though it did bring about “two long YouTube apologies.”

In other NEWS Ariana now has bangs!

The "Into You" singer debuted her new hairstyle Saturday evening (July 23) on social media.

She tweeted –"Change. feelin free. happy. Banginnnnnnn," she tweeted. "But yeah bangs. why do y'all always gotta be right about everything. I love you. ty for loving me and caring and having my best interest at heart. I love u."

The hair change was prompted as the Grammy-winning singer-actress has joined the cast of NBC's Hairspray Live!, and will play the role of Penny Pingleton.

Fans are likely to see yet another hairstyle change from Grande when Hairspray Live! airs Wednesday, Dec. 7, at 8 p.m. ET. -Staff Writers