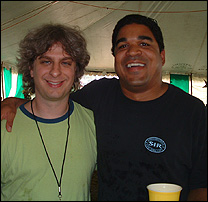 While jam band festivals were once generally three days of noodling guitar solos, this years Bonnaroo demonstrated a shift in the jam band scene. The lineup featured everything from DJ Krush's Japanese hip-hop grooves to the dance-y bossa nova of Brazilian Girls.

"We try to produce a diverse lineup," Superfly promoter Jonathan Mayers, one of the partners in the festival, told Billboard.

"But there's still a core we push. We want to do a festival where we can have bands like the Mars Volta and the Secret Machines on the same bill as John Prine and Bela Fleck and it makes sense because it's about great music and great live performances."

And, added Mayers, "If you want to talk straight-up business, in order to bring new people in, if you do the same thing every year it gets kind of stale."

This year's festival attendance decreased by 17% from last year, which drew the biggest Bonnaroo turnout to date of 90,000, according to Billboard. Earlier this year, Bonnaroo promoters were forced to cancel their planned summer Zooma tour due to poor ticket sales. Zooma was to be headlined by Trey Anastasio and Ben Harper.

Mayers says there is little cause for concern. This year's Bonnaroo still managed to pull in a higher attendance than its first year, which only drew 70,000. "Anytime you pull around 80,000 people in the middle of anywhere – especially the middle of Tennessee – it's a huge amount of people," he said. "As the event matures I don't think it will always sell out. Sometimes it will."

Mayers also told Billboard that Superfly will be announcing a new event for this year in about one month. Another source at Superfly confirmed that it will be held in Las Vegas.

"Sometimes will promoting, things work and sometimes things don't," said Mayers. "Bonnaroo built a very grassroots, word of mouth, organic following. With [Zooma] we tried to do the same thing but it didn't work. We are going to keep trying things." –by CelebrityAccess Staff Writers