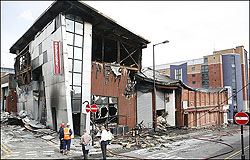 Although several employees were in the building at the time of the fire, no one was injured. Several adjacent structures were evacuated, however, while more than 25 firefighters battled the blaze. Authorities are investigating the origins of the fire.

Originally started as a weekly club night in Birmingham at the Engine House, Gatecrasher then moved to a number of different locations before finally settling in a building that formerly housed the club Republic, renaming the building as Gatecrasher One.

The club has a loyal following among dance music fans in the UK, with adherents known as Crashers. Instrumental in the rise of the mega club in the UK, Gatecrasher has been trying to appeal to a more upscale clientèle in recent years as they diversify their musical selections away from the progressive trance that once dominated the UK club landscape.

Simon Raine, managing director for Gatecrasher has pledged to rebuild the club, telling the BBC that "We will be looking at how we rebuild the Gatecrasher One club, one of the cornerstones of the UK nightclub scene and our spiritual home, as quickly as possible," adding that "We want everyone to remember those memorable nights at Gatecrasher One from down the years, safe in the knowledge it will be back – bigger, brighter, louder and more brash – it will always be with you." – CelebrityAccess Staff Writers