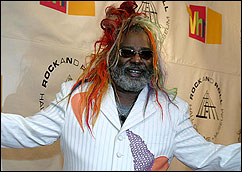 In a sweeping decision on June 2, United States District Court Judge Manuel L. Real returned to George Clinton possession of four master recordings. The four albums, produced and recorded by Clinton under the name of Funkadelic, are "Hardcore Jollies," "One Nation Under A Groove," "Uncle Jam Wants You" and "The Electric Spanking of War Babies." The decision gives Clinton sole possession of the masters, returning them to their rightful owner after more than 15 years, and Clinton has no obligation to lien holders.

Judge Real concluded that Clinton had been defrauded of his creative works, which involved the complicity of his former employees, a member of his former management team and his lawyers.

In a convoluted scheme over a period of more than 12 years, the story unfolded in Judge Real's court, the United States District Court, Central District of California, Los Angeles. Twelve years ago, Nene Montes, a Cuban-American brought a suit in Los Angeles against Armen Boladian and Bridgeport Music claiming ownership of the Funkadelic masters. The case was defeated and was re-opened in New York. In New York, Montes claimed that his company, Tercer Mundo and another group, the Association of Parliament- Funkadelic Members (APF) owned the masters. During that trial, the judge found that Boladian's documents claiming ownership were flawed. Boladian admitted that he had signed George Clinton's name to some documents. The case was remanded to California where a settlement was reached between Boladian, Bridgeport Music and Montes along with APF. Montes received a large sum of money from Boladian along with the Funkadelic masters. During subsequent actions, APF obtained possession of the masters from Montes along with liens from lawyers who tried the cases. The liens amounted to more than $2.8 million.

The current case was brought by Montes against APF seeking possession of the masters claiming conversion and fraud. Clinton entered this action as a defendant and a counter-claimant. Clinton asserted that he had never signed the masters over to Boladian, Montes, APF or anyone. A document expert who examined the five documents purported to be the assignment papers, declared that two of them were obvious cut-and-paste forgeries. He examined copies of the originals that have never been placed in evidence in any court.

Meanwhile the Funkadelic masters, originally released by Warner Bros. Records in the late 1970s, had been released by Priority Records, which is currently owned by Capitol-EMI.

This decision marks the beginning of a major effort on the part of George Clinton Enterprises to regain control over properties which belong to him and to expose the history of exploitation that has characterized his experience. Clinton also plans to move forward and not dwell on the past through the release of new music product, the development of new projects and the expansion of his performance schedule. –Bob Grossweiner and Jane Cohen