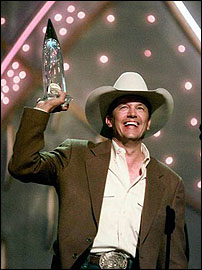 George Strait has achieved another career milestone by scoring his 50th #1 single. “She’ll Leave You With A Smile” from his Road Less Traveled CD. He set a new record for #1 songs by a single artist in any genre breaking Conway Twitty’s long-standing record of 49. Twitty, however, achieved an additional six #1s as duets with Loretta Lynn.

Upon hearing the news Strait said,“While I am extremely pleased and excited about reaching this new milestone in my career, I realize that it would not have been possible without an enormous amount of support from the fans and from country radio as well as the unending effort of dozens, maybe even hundreds of great people who have worked at MCA Records over the course of my career. There is no way that I can find the words to properly express my gratitude to everyone for their help. I am very humbled by it all.”

George Strait first hit the charts when “Unwound” took the #6 position in 1981. His first #1 was “Fool Hearted Memory” in 1982 and between 1986 and 1989 each of the 11 singles he released hit the #1 spot. Strait has sold over 57 million records and is the most certified country artist of all time with 25 platinum albums.