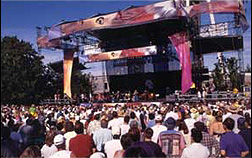 Steinberg Thrasher Presents and the City of Seattle have a new joint venture: "The
Signature Concert Series." Steinberg Thrasher is now the exclusive promoter for
the 2,900- capacity (general admission) Mural Amphitheater, located in the center
of downtown Seattle, WA, in the middle of the busiest
entertainment mecca in the state — mere foot steps from the legendary Space
Needle to the South, adjacent to the Experiment of Music and to the north, Key
Arena.

Thrasher Steinberg is currently booking this year's series as well as "Summer in
the Vineyard Concert Series" at the Secret House
Vineyards, in Eugene, OR.