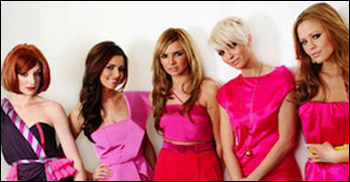 The front page of the band's official website features a pink countdown clock with the word TEN written above it.

It's thought the reunion could include recording this year's Children In Need single plus an appearance on Strictly Come Dancing, with Kimberley Walsh on the show this year.

Girls Aloud were formed after appearing on Popstars: The Rivals.

The five-piece – Walsh, Cheryl Cole, Nadine Coyle, Sarah Harding and Nicola Roberts – made their first live appearance on the show on 19 October, 2002.


The countdown timer on their website runs out on that date.


In an interview with Newsbeat last week Kimberley Walsh said she was proud to celebrate 10 years in the music industry.


The group's last studio album Out of Control was released four years ago. Its lead single, The Promise, earned Girls Aloud their only Brit award, for best British single, in 2009.


Walsh added that taking part in Strictly Come Dancing wouldn't interfere with her commitment to the band.


"We have seen each other quite a lot recently," she added.


"We haven't started rehearsals for anything yet but once we've got plans set in stone we'll let people know."


Since announcing their hiatus in 2009 all five members have go on to pursue solo projects.


Cheryl Cole has released three albums and enjoyed a stint as an X Factor judge between 2008-2010.


Roberts and Coyle also put out solo albums, although they achieved less success than their bandmate. Walsh starred in the West End production of Shrek, while Harding took on acting roles.