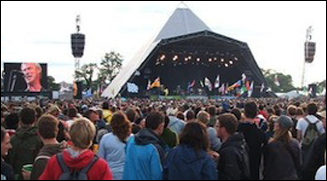 LONDON (VIP NEWS) — Glastonbury tickets have sold out in a record time of just 1 hour and 40 minutes after thousands of fans flooded the website and phone lines.

The festival's Twitter feed apologized to the "thousands" who missed out, adding that there had been some problems with getting through "due to the sheer volume of people".

Fans could reserve up to eight tickets – each costing £205 plus booking fee.

Any returned tickets will be put on sale in April 2013.

Thousands of people tried to log onto the ticket website when it opened at 09:00 BST, but many were unable to get onto the page because of the volume of hopeful music fans.

Festival organizer Emily Eavis tweeted: "Sorry to everyone who missed out and for any problems you had with the booking site."


Every ticket purchaser had to have registered on the site before the end of September. Those who managed to secure a ticket paid a £50 deposit immediately, with the remaining money due when the booking site reopens on 2 April 2013.


When tickets sold out at 10:40 BST, Michael and Emily Eavis posted a joint statement on Twitter saying: "We're genuinely humbled by the sheer number of people who would like to come to the festival and we dearly wish we could have you all along.


"Sadly, that just isn't possible, which means a significant number of people have missed out. Demand simply outstripped supply."


Tickets for next June's festival at Worthy Farm in Somerset, which will draw about 135,000 people, cost £10 more than last year.


There was no event this year as the site in Somerset took a break.


As has been traditional in recent years, the headline acts for the 2013 festival were not announced before the tickets went on sale – although Mr. Eavis told the BBC earlier this year that they had already been chosen. –According to BBC