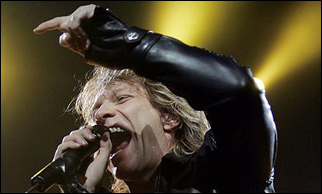 MILTON KEYNES, UK (CelebrityAccess MediaWire) — Weeks after a $400bn copyright suit was brought against Bon Jovi by a Boston songwriter, a British woman is now suing the Jersey rockers for over 400k after a member of their security allegedly ran her over with a golf card backstage at a Milton Keynes gig in 2006.

Sarah Allen alleges that she was working as a security supervisor at the National Bowl, Buckinghamshire, during a Bon Jovi concert in 2006. When a fire broke out in the VIP zone, Allen was deployed as part of a security cordon preventing backstage access. Kevin McDonnell, a member of Bon Jovi's personal security team, approached, demanded access, and then drove his golf cart straight over her right leg.

According court documents, Allen suffered a fractured knee, ligament damage and internal injuries. She was in the hospital for almost a week and has been unable to work since the incident. According to Allen the cart's run over was more than just physical – Allen claims that the mental distress ruined her sex life, undermined her marriage, put her into depression and she came close to losing her home.

Allen is now holding the entire band accountable. She is suing Jon Bon Jovi, David Bryan, Richie Sambora and Tico Torres according to papers filed at Oxford County Court. Allen blames the New Jersey band for failing to train or control McDonnell – and is demanding more than 400k in compensation and damages.

"I don't care about your emergency situation," McDonnell allegedly said to her. "Get out of my way, you f**ing whore."

According to the the Daily Telegraph, Allen approached Thames Valley Police at the time of the 2006 episode, but McDonnell had apparently already left the US, making it difficult for Allen's legal team to trace him. Though she tried to make her case in America, a court there ruled that they had no jurisdiction over the English incident.

"But if we found out that McDonnell was back in this country," the investigating officer told the Daily Telegraph, "there is nothing to stop us arresting him and interviewing him about the alleged attack."

Bon Jovi's representatives dismissed her allegations. "None of the band members were present when she blocked the pathway of a crew member, nor were they aware of any disturbance at the time," they said in a statement. "Mrs Allen's claim in England follows a claim she attempted to file in the United States, which was rejected," according to the ANI. –by CelebrityAccess Staff Writers