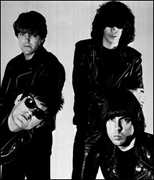 NEW YORK (CelebrityAccess MediaWire) — Mickey Leigh, brother to the late Joey Ramone has taken issue with Linda Cummings, the widow of his sibling's former bandmate, Johnny Ramone (AKA John Cummings) after she came out in support of the McCain/Palin ticket.

Linda Cummings had been using the name Ramone in media appearances with the Palin family in an attempt to help drive voters for the Republican candidates but Leigh would have none of it.

Leigh issued a statement on the matter which, in part, read:

"It has been brought to my attention that Linda Cummings, using the name Ramone, has been in the media joining with the Palin family and the McCains to attempt to aid their campaign for the Presidency.

"As a President of Ramones Productions, and brother of Joey Ramone, I just want it to be clear that Linda Cummings does not represent the political views of the Ramones.

"Surely, as for Joey Ramone, the only Ramones song he would sing at a Republican campaign event would be Glad To See You Go."

Although Johnny had once said "God Bless George Bush" during the 2002 Rock N' Roll Hall of Fame awards, Leigh contends that the reference was sarcasm.

"I should add that when Johnny stated 'God Bless George Bush' at the 2002 Rock N' Roll Hall of Fame awards, I realise now that he was on to something. Because if it were not for George Bush and his handling of our country the past eight years, I doubt so many Americans, including so many highly regarded Republicans, would now be getting behind Barack Obama. So, yes, God bless George Bush for paving the way to Obama." Leigh stated.

Leigh may have his facts wrong however and Johnny, who died in 2004 from prostate cancer, was believed to be a republican voter, once telling voters "I think Ronald Reagan was the best president of my lifetime." – CelebrityAccess Staff Writers