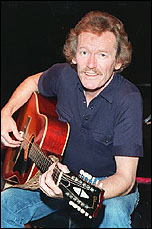 (CelebrityAccess News Service) — Singer/songwriter Gordon Lightfoot, who has recently been suffering from a rare abdominal condition that has forced him to have two surgeries with more scheduled, returned to the stage at the Glen Gould Theatre in Toronto on December 3. He was inducted into the inaugural Canadian Songwriter's Hall of Fame. In addition, one of his songs, "If You Could Read My Mind," was also honored as one of the 12 most influential Canadian songs of all time. It was performed by Blue Rodeo at the gala.

Also inducted into the Hall of Fame were Felix Leclerc, Hank Snow, Madame Bolduc and Alfred Bryan–all of whom are deceased.

"I'm very happy to receive this award, and I'm happy to be a part of this very first one," he said.

Due to his health condition, Lightfoot is not expected to start touring again until 2005. –Bob Grossweiner and Jane Cohen