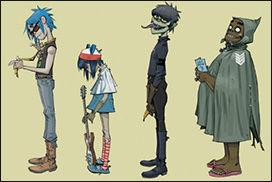 LOS ANGELES (CelebrityAccess) — Damon Albarn and Jamie Hewlett's animated multi-media band Gorillaz announced that they will be hitting the road for their first tour of North America in 7 years.

As of yet, no details about the artists who will be helping Hewlett's animated band members, Murdoc, Noodle, Russel and 2D, perform.

News of the tour comes on the heels of the band announcing their latest album Humanz, which has been trickling out to the masses. Thus far, four singles — "Saturnz Barz," "Andromeda," "Ascension" and "We Got the Power" — have debuted on the Hot Rock Songs chart in recent weeks. The full album is set to be released on April 28th on Warner's Parlaphone label.