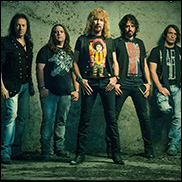 (VIP-NEWS) — Spanish rock band Medina Azahara have become the latest act to fall foul of ever-stricter immigration controls in the US, having been forced to cancel an American tour after their keyboardist was denied entry at the border.

According to local daily Diario Córdoba, Manuel Ibáñez erroneously answered ‘yes’ a question on the ESTA (Electronic System for Travel Authorization) visa waiver form asking if “you have ever committed fraud or misrepresented yourself or others to obtain, or assist others to obtain, a visa or entry into the United States”.

Ibáñez, who says he made the mistake when filling in the form on the flight over, sought to redress the error at the consulate but was deported after a two-hour interrogation.

Ibáñez’s deportation comes after visa issues prevented several performers from gaining entry to the US for South by Southwest in Texas last month.

‘Andalusian rock’ pioneers Medina Azahara, who have been active since 1979, have been forced to cancel shows in New York, Maryland, Dallas, Anaheim and Chicago as part of a planned US tour, as well as a date in Bogota, Colombia.

“At the moment, we do not know if we can reschedule the shows for another time,” says lead singer Manuel Martínez, as on 28 April we have to be back in Cordova for a concert in Adamuz.”

He does, however, express a wish to return to America soon – and takes a shot at US president Donald Trump, who has been criticized by agents and promoters for his hardline stance on immigration: “Who knows – if there is a change of president there [the US] things might change,” he comments. “We’ll see.”