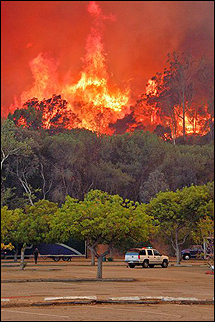 LOS ANGELES (CelebrityAccess MediaWire) — Los Angeles’ legendary Greek Theatre is one of the many landmarks along California’s Griffith Park, including the Hollywood sign, Griffith Observatory, Los Angeles Zoo and Gene Autry Museum, that remain closed on Thursday, following near brushes with disaster due to raging fires sweeping through the park over the past few days.

“Due to the heroic and tireless efforts of the men and women of the Los Angeles Fire Department we have some very promising news to report to you,” L.A. Mayor Antonio Villaraigosa said at a news conference Wednesday evening. “The tide is turning in our favor and we are winning the battle against the flames and the fire is 75 percent contained.”

The Greek Theatre’s parking lot area was used a command post by the fire department throughout the two-day struggle, but firefighters will be leaving the venue over the next few days as the fire winds down due to helpfully humid weather.

The fire, which may have been started by a homeless man who fell asleep smoking a cigarette, broke out around 1:30 p.m. Tuesday just east of the Hollywood sign in the Hollywood Hills and quickly raced into the thick brush, fanned by winds of roughly 10 mph amid bone-dry conditions and high temperatures, according to the Los Angeles Times.

At one point some 300 people evacuated their homes, but in the end, only one home was damaged, sustaining about $30,000 in damage, officials said.

The Greek Theatre was forced to move new-age harpist-vocalist Loreena McKennitt’s show, scheduled for Thursday, to the nearby Gibson Amphitheatre. All tickets for the concert must be exchanged at the Gibson box office upon entry.

The Nederlander Organization, who books the Greek, has not announced any changes for the planned Keane concert on Friday, May 11, or Modest Mouse on Sunday, May 13, but told the Orange County Register that changes may be announced. –by CelebrityAccess Staff Writers