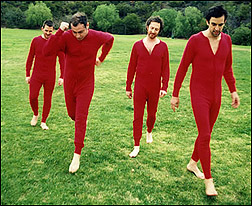 ST. LOUIS (CelebrityAccess MediaWire) — The band Guster has been tapped to showcase a fall tour of college campuses being sponsored by shoemaker Crocs Inc. The tour, being promoted by St. Louis-based 360 Productions plans to provide a "fun, interactive campus music experience." Spin Magazine has also signed on as a media sponsor for the event.

"We are incredibly excited to work with Crocs on the Next Step Campus Tour," said Mike Kociela of 360 Productions. "It seemed like our objectives fell in line perfectly, and from the moment we discussed the concept, the project started to gain huge momentum."

360 Productions and Guster are also working with non-profit organization Reverb to promote "greening" initiatives directed at touring artists and the music industry at large. Formed by Lauren Sullivan and her husband, Guster Guitarist/Vocalist Adam Gardner, they have been in the forefront of environmentally-friendly touring since 2004.

Talent for the tour is being booked by Buster Phillips, with tour sponsorship being handled by Marcie Cardwell at CAA. More information, including the full lineup, tourdates and additional sponsors will be forthcoming. – CelebrityAccess Staff Writers