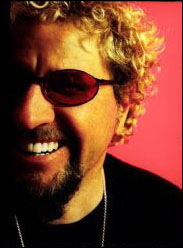 SAN LUCAS, MEXICO (CelebrityAccess MediaWire) — Sammy Hagar is adding a new dimension to his Cabo Wabo franchise, a brand that already includes Cabo Wabo Cantinas and Cabo Wabo Tequila, and now Cabo Wabo Radio, the party that doesn’t sleep. “We’re out to create the most exciting radio station in the world, all up all the time, Jalapeno Radio, a feel-good celebration 24 hours a day,” said Hagar.

Cabo Wabo Radio is designed to offer a new, wide, horizontal niche of music programming consisting of stimulating, upbeat, exciting music you can tune into any time, day or night. It will feature New Rock and great music in many flavors and styles that delivers a feel-good, have-a-great-time atmosphere.

The station will go live from the new Worldwide Broadcast Headquarters at The Cabo Wabo Cantina in Cabo San Lucas Mexico. It launches on October 11th with The CABO WABO 55, "Fifty Five Hours Of Music You Can't Drive Without.” This leads up to “CABO WABO LIVE,” a live show broadcast from the Cantina at 6 pm Mountain Time celebrating Sammy's 60th Birthday Bash!!!.

From this day forward, “CABO WABO LIVE,” will become a daily live show and the remaining 18 hours of programming will be a non-stop, high-energy party. Woody Nelson – the co-founder of CABO WABO RADIO – is the host of CABO WABO LIVE. Many celebrity guests are already lining up for the party.

Shadoe Stevens is the Senior Director of Programming, as well as Consultant for Marketing and Strategic Planning. He brings his guidance, experience, and incredible knowledge of music and FM Programming to this bold new adventure. "CABO WABO RADIO could not exist in its present form and awesome presence without Shadoe Stevens", says Nelson, “His vision and innovation are extraordinary and we are ecstatic that a professional of his caliber is on our team.”

Shadoe created the original format, programming, and marketing for what has become the most successful rock station in the country, “World Famous” KROQ-FM in Los Angeles. A Cleo Award winner, in advertising and marketing he created the first regional advertising campaign ever to have received a 2 page spread in Time Magazine. As an actor, he starred in several movies and numerous television shows including two top 20 network series. During AT-40 he was on in 120 countries to an estimated 1 billion listeners every week and became one of the most recognized voices in the world. As Founder and President of RhythmRadio, he had original programming on the radio in 30 countries and on the Internet delivered in seven languages.

CABO WABO RADIO will be available at many levels for your station and they invite you to experience the next generation of Radio Programming. Their primary demographic target is 18 – 49 years old. Its psychographic target is “young people of any age who enjoy feel-good, party energy.”

To further enhance the energy level of the already great product Woody and Shadoe asked themselves what would be the best way to give the station personality in the time that it is to run jockless and to further enhance the listening experience during live content. They reviewed hundreds of potential candidates to breathe life into the station and collectively concluded there was only one voice that could achieve the high standard which the station had set for itself. That voice is now the station voice of internationally renowned voice over aficionado Pat Garrett of Pat Garrett Creative. "We are honored to have Pat's involvement in this venture and Pat will help us make radio history", says Woody Nelson.

There is the 24/7 format which originates from the Cabo Wabo Cantina. There is CABO WABO LIVE which is a daily show that originates Live from the Cantina's FM Studios and takes your listeners inside all things Cabo Wabo. Live music, Interviews, More music, and all of the excitement from 6 PM to 12 Midnight Mountain Time 7 days a week.

The station will be jock less initially with the exception of the CABO WABO LIVE, which as a format will allow your station to broadcast as is or implement talent of your own during the 18 hours of unhosted daily programming. Several specialty Countdown shows are also in the works that will be included in the affiliate package.

Due to early overwhelming interest, CABO WABO RADIO is looking for potential affiliates to begin contacting them as early as possible. Markets are limited and are exclusive on a first come first serve basis. They expect markets to go fast. The 24/7 jock less format will be available beginning July 5th.

To secure the programming for your station, email the marketing department for a Demo, Playlist, Pricing and Market Availability at CABOWABORADIO@AOL.COM