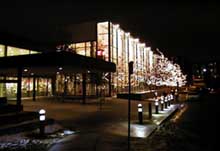 The relocation of Minneapolis' historic Guthrie Theater has the theater's architect and some preservationists up in arms concerning the decision to demolish the 38-year-old building that houses the venue. The Walker Art Center wants to tear down the building housing the adjacent theater as part of a $90 million expansion to accommodate the growing number of visitors and expand their sculpture garden.

The Guthrie will relocate to a new, three-stage complex along the Mississippi River in 2005 and its famous thrust stage — surrounded by an audience on three sides — will be recreated in the new $100 million "Guthrie on the River" complex, although the theater will occupy a smaller space. It will also include a smaller studio stage for experimental works and be able to build sets on-site instead of having to build them somewhere else, disassemble them and move them to the theater.

The Guthrie opened on May 7, 1963, with a production of "Hamlet'' directed by the venue's namesake, Sir Tyrone Guthrie. Hume Cronyn and Jessica Tandy were in the Guthrie's original acting company.

Among the artists who have performed at the Guthrie Theater Bruce Springsteen, John Coltrane, Led Zeppelin and guitarist Leo Kottke, who recorded a live album there.