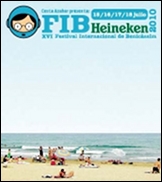 BENICASSIM, Spain (VIP NEWS) — Heineken will no longer be the main sponsor for Spain's highest-profile summer music festival, held in July at Benicassim on the eastern Mediterranean coast.

Heineken had been the main sponsor for the past 10 years of Benicassim's 16-year history, and had asked the media in Spain and abroad to refer to the event as FIB Heineken. It will now be known as FIB, or the international Benicassim festival.

Irish pioneer festival promoter Vince Power took full control of FIB this year, after working for three years with the founders who set the festival running in 1994. For reasons that probably have more to do with the line-up than the economic crisis, attendance at the four-day fest this year fell to 127,000, from last year's record 200,000.

Heineken said that its decision to no longer be a main sponsor followed "10 successful years during which FIB Heineken has become one of the most important festivals on the international circuit."

Heineken stressed that it will remain very active in the live Spanish music scene, where it promotes the June 21 Heineken Music Day, Heineken Music Selector, Heineken Greenspace in Valencia, and the international jazz festival, Heineken Jazzaldia, in the Basque city of San Sebastian (Donostia).