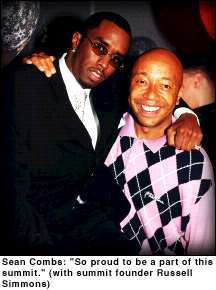 The first-ever Hip Hop Summit 2001 concluded with industry hip-hop leaders, artists, and civil rights and political organizations reaching agreement on a series of initiatives and commitments that will affect the artistic, social and landscape of our society and the global community.

* Labels are to be plainly displayed in a non-removable form on the front cover artwork in a standard size.

* Internet sites that promote or sell specific albums or songs that have the label should display the label along with the album promotion. This advisory should follow the on-line user all the way through purchase. Websites should also provide a link to "parentalguide.org," an information site about media ratings.

* Samplers and posters are often used in marketing hip-hop music. It was agreed that all samplers and posters promoting labeled albums or songs would carry the label or an indication that the album being promoted carries the Parental Advisory Label.

2. Industry Adoption of Hip-Hop Mentoring Programs. Def Jam introduced a Hip-Hop Mentoring Program emphasizing the need for a stronger focus on artist development. The programmatic mission and goal of the Artists Personal and Career Development Program (APAC-DP) is to provide Hip-Hop artists with an all inclusive opportunity to enhance and ensure their personal and professional development while maximizing their career advancement in the entertainment industry. Using Def Jam Hip-Hop artist Jinx as an example, key components of APAC-DP include:

* Assignment of a personal and professional mentor for each artist.

This mentoring program will serve as a new paradigm for the Hip-Hop industry at large; and as a result of the Hip-Hop Summit, other labels have joined Def Jam in developing similar programs at their labels.

3. Political Empowerment of the Hip-Hop Community. An alliance was formed to help empower and promote the Hip-Hop industry with the National Association for the Advancement of Colored People (NAACP) led by Kweisi Mfume, Southern Christian Leadership Conference (SCLC) led by Martin Luther King, Jr. III, Million Family Movement and Nation of Islam led by the Honorable Minister Louis Farrakhan, and Rap the Vote led by Executive Director Mario Velasquez. Some of the initiatives to be carried out include:

* Hip-Hop Political Action Committee that will educate and address issues important to the Hip Hop community such as freedom of speech, racial profiling, and other issues; and help elect and raise funds for political candidates.

* Massive Rap the Vote voter registration drive and get out the vote campaign for 2002 and 2004 elections.

* The creation of a Hip-Hop Think Tanks with the initial Think Tank at Columbia University. Dr. Manning Marable, Dr. Cornel West, Dr. Michael Eric Dyson and other leading intellectuals will work together to establish a forum for Hip-Hop artists and executives to engage in an ongoing dialogue with the intellectual community around questions on the impact of Hip-Hop culture and music on the global community.