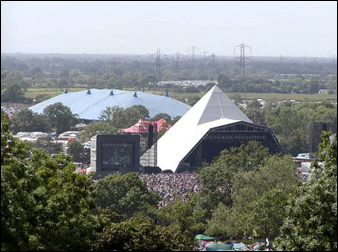 GLASTONBURY, UK (CelebrityAccess MediaWire) — Emily Eavis, daughter of the festival founder Michael Eavis, and her co-organizer Nick Dewey, are launching the Holy Cow night in London on Wednesday. The Glastonbury Festival is launching this regular gig night to give new bands the chance to earn a slot at the legendary music event.

Those who annually don wellingtons and pack tents might be shocked at the thought, but Glastonbury is taking The X Factor route. For the UK's biggest music festival is hijacking the format of the Saturday night television show in an attempt to find the brightest unsigned rock talent.

A regular club night called The Holy Cow is touring the country in search of potential stars. The judges' favorites will then compete against each other before the winners are offered slots on stage at the legendary festival, held at the end of June.

At the launch in London's The Social club, indie outfit, The Courteeners and New York hipsters Vampire Weekend, wowed a crowd of 150 rock fans in an attempt to win the favor of watching judges.

The Courteeners, whose performances over the past year in their home city of Manchester have led to favorable comparisons with bands such as Oasis and The Libertines, were drafted in at the last minute after The Envy Corps pulled out because they could not fly over from the United States in time.

"As a festival, we would really like to lead the way in new music," said Emily Eavis, daughter of festival founder Michael Eavis.

Ms Eavis is now looking for new talent to play at future Holy Cow gigs after the launch on Wednesday.

"We're really after unsigned acts and finding the best new acts from all corners of the country and beyond," she said.

The most impressive bands will be booked for one of the festival's smaller stages, with Ms Eavis hoping to uncover artists who will star on the main stage in the future.

"The aim is to collect as many new bands as possible throughout the year and build up a strong roster of new acts," she said.

"We've had some brilliant debut sets throughout the years, where bands start at Glastonbury on a very small stage and end up playing the Pyramid in a few years."

Acts wanting to appear at Holy Cow should contact organizers via Holy Cow's MySpace site. The next festival will take place in Somerset from 27 to 29 June 2008.