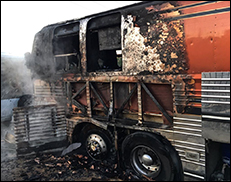 ST. LOUIS (CelebrityAccess) — The members of two bands and their touring teams woke up to a rude surprise after the tour bus they were sharing was destroyed in a fire.

"Woke up this morning to our bus on fire. We all got out and are okay," the band Hundredth wrote on Twitter on Tuesday, following the blaze.

The two bands, Being As An Ocean and Hundredth, were traveling from Kansas City to Nashville, Tenn., and passing through St. Louis when the fire aboard their bus broke out.

“Around 3 or 4 o’clock in the morning, we smelled smoke and woke up to our guitarist Tyler telling all of us to get out and there was a fire,” Yves Mathieu-East, a crew member for Being As An Ocean told the St. Louis Post-Dispatch. “We all rushed out. No shirt, no shoes. Everything went up in flames.”

The 13 occupants of the bus reported that they lost laptops, passports, money, and jewelry, but were spared the loss of their road gear, which was in a trailer behind the bus that remained untouched by the fire, the Post-Dispatch said.

The bands were touring as a part of the Vans Warped Tour and both bands have stated that they plan to continue. – Staff Writers