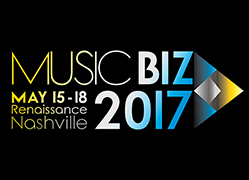 (Hypebot) – Hypebot is proud to be hosting the official Indie Music Forum on May 18th, as part of the Music Biz 2017 convention. I'll also be interviewing one of the most influential figures in independent music, A2IM CEO Richard Burgess, live on stage.

The Music Business Association (Music Biz) and Hypebot have just announced our full agenda for this year’s “Indie Music Forum powered by Hypebot,” which will be held on Thursday, May 18, as part of the Music Biz 2017 convention at the Renaissance Nashville Hotel in Nashville.

The Forum will be led by a Keynote Conversation with Richard James Burgess, Ph.D., CEO of the American Association of Independent Music (A2IM), a trade organization representing a diverse group of over 400 Independently owned American record labels. Burgess will share how his experiences as an artist, musician, producer, composer, manager, educator, inventor, and label executive inform his advocacy for independent labels and artists to interviewer Bruce Houghton, President of Skyline Artists as well as Publisher and Editor of Hypebot.

Other panels will provide independent artists with tips on how to stand out from the pack and explain the ins and outs of record contracts in 2017.

From studio drummer, music-computer programmer, recording artist, record producer, composer, author, manager, inventor, educator, and label executive, Richard Burgess’s 40-year music industry career has truly spanned the spectrum of the industry, giving him the insight to now sit at the helm of A2IM to advance the voice of the independent label community. During this keynote, Bruce Houghton — Founder and President of Skyline Artist Agency, a national and international booking agency, and Publisher and Editor of Hypebot and Music Think Tank — will talk with Burgess about his deep roots in the industry and how those experiences help shape the decisions he makes day-to-day to be an advocate, educator and connector for A2IM’s over 400 label members.

Most musicians are terrible at telling their story and describing their sound. Why? We’re inside the music AND the mind that made it, so it’s easy to lose perspective. But a band that has a solid grasp on their branding has a huge advantage over acts that don’t. In this seminar, Chris Robley and Kevin Breuner lead you through a handful of exercises that will help you identify what makes you unique, and how to communicate it clearly to the world.

Entertainment lawyers are constantly amazed at the number of industry types that, at a fundamental level, have little to no understanding of how the music business actually works. Admittedly, a robust understanding of publishing agreements or copyright law aren’t necessarily requirements for, say, an effective marketing campaign. But, no matter our role in the industry, are we as lawyers doing our clients a disservice by not advising them against the backdrop of even a rudimentary understanding of how they earn their livelihood?

Naturally, the successful creator may wear a number of hats, each of which may involve a wide array of complex legal or business concepts. In the rapidly-evolving landscape of today’s industry, the centerpiece of the (profitable) artist’s career is the still-all-important record deal. With that in mind, this panel will provide attendees with a 10,000-foot perspective on the most important contract they — or their clients — may ever sign.

Music Biz 2017, which will return to Nashville from May 15-18, is the music industry’s premier event, giving the commerce and content sectors a place to meet with trading partners, network with new companies, and learn about new trends and products impacting the music business. Featured keynotes include Troy Carter, Global Head of Creator Services at Spotify; Jeff Krones and Hunter Williams, both Music Agents at Creative Artists Agency (CAA); and more to be announced.

Returning favorite sessions will include the Metadata Summit, Brand & Strategic Partnership Summit, and Entertainment & Technology Law Conference, as well as an encore for Music’s Leading Ladies Speak Out and various special interest programs and breakout sessions.

In addition, the convention will include a variety of Live Music Showcases, including the second annual Industry Jam, in which music business execs join big-name musicians onstage for an evening of live music. Music Biz will also present Breakthrough Artist Awards to Maren Morris and Lukas Graham; the Presidential Award for Outstanding Executive Achievement to Mike Dungan, Chairman and CEO of Universal Music Group Nashville, and the Independent Spirit Award to Terry Currier, Owner of the iconic Portland, OR-based record store Music Millennium. Additional award recipients will be announced in the coming weeks.

Discounted early bird registration is now open at www.musicbiz2017.com, and for a full list of currently confirmed programming, visit https://musicbiz2017.sched.org. There is a special rate of $249 is available for first-time artists, songwriters, managers, and independent labels.