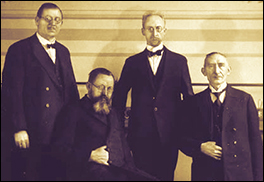 (Hypebot) – Although old, mostly white, men in suits ruining things is more commonplace than ever these days, The Grammys stand out in particular as highlighting much of what is wrong with the music industry today in general and Grammys culture specifically.

Hello from the other side — Adele’s 2016 pretty much starts and ends there. We know it, Beyonce knows it, Adele knows it. The only people who don’t know it are, to put it in Thom Yorke’s words, ‘the last dying fart of the music industry.’ But can you blame them? Yes and no, depending on how old you are. These are still, by and large, the same executives who helped steer what was previously the most profitable industry in entertainment. The most expensive albums ever made only cost about a million dollars. Add on the marketing plus another million just for fun, and even the most expensive album would still be considered low budget when compared to some movies. With the potential to make hundreds of millions of dollars between album sales and touring, no other entertainment medium came close to the kinds of profits seen in the music industry from 1960 to Napster.

"Doug Morris is determined to squeeze everything out of Adele until she’s writing songs about the death of her child’s plant."

So can I understand why Doug Morris is determined to squeeze everything out of Adele until she’s writing songs about the death of her child’s plant? Yes. And do I want to say that he doesn’t know any better? Yes. But I can’t. Because at this point it’s been almost 20 years since the industry was first brought behind the shed and slaughtered, yet they’ve been steadfast in their refusal to change. Do you want real change in the music industry? Wait until the execs from its golden days die out. Or to be more pleasant, until they retire. Wait until millennials move in and refuse to sit at their assistant desks, like children banished from the adult’s dinner table. Until the kids who grew up with a different understanding of what a company owes to its employees and consumers takes over.

This year's Grammy award ceremony was pitiful — Even aside from the controversy over who won. I’m referring to how sloppy the whole endeavor was, from Metallica’s malfunctioning mic to James Corden’s meta entrance — a harbinger for the entire evening. Perhaps my favorite moment of the night was Adele stopping her George Michael tribute to start it over and to get it right. A reminder that there’s a human, flawed as we all are, hidden underneath the music industry machine.

The real winner of last night? No surprise here, it’s all I’ve read today on Ad Age: Target & Google. Why? Because advertising is always the first industry to bend with shifts in the cultural landscape. It’s why millennials still want to work at a hundred year old agency like Grey. Hearing Neil Portnow complain about the price of a Spotify stream is like bringing Cornelius Vanderbilt back from the dead to complain about the price of coal-powered train rides. Should artists make more money? Of course. Artists are the lungs through which our society breathes. But streaming has hit its plateau in terms of how much an artist will make per song — Instead of complaining about it, how about you find alternative ways to monetize your craft? It’s more culturally acceptable now to license your music to a Volkswagen commercial (Looking at you Grizzly Bear, wherever you went) than it ever has been before.

What if The Grammys did something different? What if they partnered with a social network to create some sort of live or interactive element? Right now I don’t have the answer as to what they should have done. But do you want to know who might? My cousins in the tenth grade. As digitally savvy as I think I am — it’s not my life, it’s just my work. I can easily go one day without my cell phone before experiencing any symptoms of withdrawal. And while I wish that my cousins would take a hike for a reason other than to Instagram it from the top of the mountain, the lense through which they view the world is full of technological capabilities. They know no other world besides entertainment on demand. And I guarantee you they didn’t buy Adele’s album either. They might have looked for it on Spotify, but once it wasn’t there, proceeded to give up. What I’m getting at here is that Adele’s success is not sustainable. Neither is Taylor Swift’s fight with Apple. There may be exceptions to the rule, but those are the outliers you learn in seventh grade statistics to leave out.

So what were the best moments from last night? Beyonce’s performance, a stunning work of made for the internet performance art. Sturgill Simpson, making country more approachable by blending it with alternative rock. A Tribe Called Quest, actually saying something of societal value. Despite my pessimism, music is not dead. It’s just harder to do profitably now than it ever had been before. I do fear the day when it’s economically unsustainable for anyone to take up musician as a career. But right now it’s still possible, you just have to do something different if you want to be successful. And you have to recognize too when different has become cliche, when the surprise midnight release of your record is less surprising than asking people to pay for it. You might have to buy an hour of prime-time HBO programming. And if you can’t afford it, you might have to do a country cover of an alternative rock staple.

If we learn just one thing from Chance, it’s that you have to shed the old music industry’s dead weight. I had a friend in promotions tell me that No Problems could have been a number one radio hit. But clearly he didn’t need that. Based on what we’ve seen of Chance’s intuition alone, he could probably snag a marketing job way sooner than my friend, who is still desperately trying to leave the music industry.

"all the wrong people actually won"

It might be too late to reverse the music industry’s fortunes — Don’t let any increase in vinyl sales fool you otherwise. Spotify and Pandora are doing their best. Touring is too. But it’s taken too long; Kids don’t want to be rock stars anymore, they want to be app developers and they want to be Instagram models. Music has lost its luster; It’s become a soundtrack to the release of the new Android. Even other TV networks aren’t afraid of The Grammys; HBO counter-programmed it with two of their biggest Season Premieres (Last Week Tonight & Girls). Hell, even Bravo aired a new episode of the Real Housewives of Atlanta while Beyonce was performing. I don’t blame the artists, I blame the executives. What they’ve done over the past two decades may have lined their pockets, albeit though with less money than they were used to. But what it’s ultimately done is make music unsustainable. By hesitating, they’ve missed out on an entire generation of consumers. The Grammys is a visual reflection of it all. Lackluster in its execution, and uninspired in its awarding. If I watch The Grammy’s on YouTube next year, maybe I’ll begin to feel otherwise.