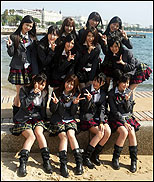 TOKYO (CelebrityAccess MediaWire) – CD sales in Japan saw a solid improvement in 2011, according to Record Industry Association of Japan with much of the credit for the boost going to AKB48, a sprawling, franchised j-pop girl group.

According to Japan Today, Oricon, a company that tracks music sales, aggregate CD, singles, DVD and Blu-ray sales were valued at 314.1 billion yen in Japan last year with AKB48 products accounting for a full %15.5 of that total.

AKB48 is hugely popular in Japan with their last 11 singles charting at #1, and often making up the entire top 5 of the charts for extend periods of time. In all, the group has notched up almost 12 million records sold.

The group is composed of 4 'teams' — 3 with 16 members each and a 4th team with just 11 girls. Additionally, the group maintains a 'farm team' of girls who are training to join the main teams and the group has also launched "franchise" teams in other Asian nations. Each team produces a new concert show for each theatrical season which they perform on a daily basis and demand for tickets is sufficient that a lottery system is used to determine who gets a pass to a show.

AKB48 is based on Japan's long-standing "idol culture" in which young Japanese, particularly women, become media personalities. Increasingly, these Idols have included music and formed groups such as AKB48. – CelebrityAccess Staff Writers