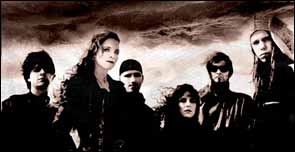 CALAIS, France (CelebrityAccess MediaWire) — According to the bands website “Stream of Passion” suffered a terrible blow on Friday afternoon when the band arrived at Calais, France to board the Ferry to England. The Mexican band members were instantly separated from the group, and each other, and were interrogated by British and French Police for four grueling hours. All because the British immigration service was convinced they were intending to take up illegal residence in England.

The immigration service asked Naomi, the band's tour manager, to provide them with evidence to the contrary, and listed the types of documents required. Naomi jumped through every one of their newly found hoops, and repeatedly produced whatever documentation they demanded as proof, and immigration could still not be persuaded. Even with the help from the promoters of the concerts in England, various Embassy officials, and immigrant agents in Britain (who told the tour manager there shouldn't have been any problem for them to enter the UK in the first place) there was no changing their minds. This eventually led to the 'deportation' of Marcela, Alejandro and Diana without any possibility for them to get to England to perform the shows.

It appears the Mexicans have fallen unfortunate victims of, as one British Immigration agent trying to help said: "the new British political flavor of the year: 'we hate all immigrants'".

Stream of Passion returned home that same day, extremely disappointed and disillusioned with the proceedings. They wish to apologize to all the British fans and to those fans that traveled from various countries all over the world, for being unable to make it to these last two shows. They deeply regret not being able to perform for you this last time, as they were also so much looking forward to meeting you all again.

The concerts appear to be going ahead as planned with new bands performing; please see the Classic Rock Society website for more information.